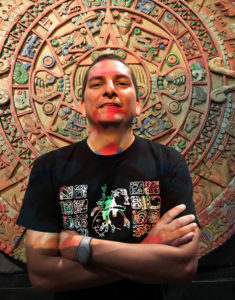 On a remote island in the middle of the Pacific, deep in the lush rainforest, just miles away from an active volcano, you can find artist Jacob Medina working on one of his whimsical tiki or skeleton paintings.  Serenaded by coqui frogs and frequent downpours, Jacob creates his unique vision of Hawai’i by combining its legends, myths, and cultures with imagery from his Mexican heritage.

“I was actually born on the Day of the Dead”, he explains, “so this holiday with its icons of sugar skulls and skeletons became very personal to me.”  But it wasn’t just the special connection to his heritage and this holiday that influenced his artwork.  “One of my earliest influences came from skateboarding.  I used to copy graphics like Jim Phillips’s “Screaming Hand” or Powell Peralta’s skull series. They had a tremendous impact on my subject matter and style.  Skateboarding was really my first glimpse into the Lowbrow art scene.”

Right out of High School, Jacob spent five years in the army, with a deployment to Kosovo, after which he was ready for a big change, and moved to Hawai’i where he earned his BA in Art and was properly introduced to the icon of the tiki.

“I think of the skeleton and tiki as armatures where I can build a variety of my own characters and archetypes that live in a world of fantasy, adventure, and humor.”

When asked about achieving the sense of space his paintings possess, Jacob admits, “It wasn’t until I learned about the invention of the multiplane camera by Walt Disney that I realized how I wanted to exaggerate the idea of space in my paintings.  I mimicked this technique through contrasting form, color, and texture.  Glossier paint tends to jump to the foreground while matte colors recede into the background.  So I started using One Shot enamel over acrylic and it really helped my foreground figures stand out.”

Jacob’s skills in painting haven’t stopped him from branching out into other mediums, though.  He also creates many of his own custom frames for his pieces that reflect the characters within; a salty pirate tiki is gilded in gold, some hot rod cruisers speed along in an old Model-A grill shell, and a mariachi soulfully plays guitar within a wooden altarpiece.

Though Jacob started out entering his work in juried exhibitions, it took years to find his true audience by doing events like comic cons, festivals, and local markets.  “This is where I’ve noticed that people really want to meet the artist, and after they do, they connect with the work more.”

Since finding his unique style, Jacob Medina’s pieces have been sold around the world and include collectors like femme fatale Jane Wiedlin of the Go-Go’s, and Nichelle Nichols, who played the iconic role of Uhura in Star Trek.